Indie Books on the Interwebs

A while ago, I applied for an feature on indie books on Literary Lightbox. LL’s Indie Spotlight features twelve authors per year, one each month. The list is specially curated out of a pool of many millions (possibly jillions) of applicants (Probably, I don’t know).

Yesterday, I got this:

Loretta Milan over at Literary Lightbox has named Ours Is the Storm as a 2016 Indie Spotlight Finalist. Literary Lightbox is a book blog and writing community attracting over a million yearly readers. The site’s full of book reviews, articles on writing topics, and all kinds of great stuff for both writers and readers.

Ours Is the Storm joins five other selected authors and their books: Carrie Morgan, with The Road Back From Broken; Michelle Louise Cox, with A Girl Like You; Ellie Holmes, with The Flower Seller; Gary Corbin, with Lying in Judgment; and Terri Lee, with Paper Castles. These writers will be featured along with me in the upcoming months. Big congratulations to all of them!

I’ll be appearing on the site sometime in the next few months. Doing what? Who knows! Probably answering questions and waxing lyrical about judo or cartoons or the importance of beer, so keep your eyes open.

As always, please help me spread the word about Ours Is the Storm and about my web serial, RAZE. If you know someone who’s into reading fantasy, let them know – or, remember that the holidays are on the way, and who doesn’t love books to curl up with like a nesting gazelle (that is a thing, right?) during the winter? I’ll tell you who. Replicants. Beware.

For those of you indie authors out there who might be reading, consider submitting your book for the Indie Spotlight here.

So this is the first time I’ve seen it all printed out: Yep, that’s the full, printed manuscript for The Victorious Death of Eliza Warden. It’s huge. Plenty of space for me to fill with red ink.

Coming up is the difficult process of trying to separate myself and my own knowledge from the experience of someone picking up the book sight-unseen. I’ve had some great input from beta readers (thanks! You know who you are) and more coming in (keep it coming!), as well as my own ideas about what needs to change.

Hey all, I ran across this yesterday which was a pretty cool find. BestFantasyBooks.com compiles several lists every year of their favorite works, and for 2016 Ours Is the Storm made their top 25 best indie fantasy books list! (You have to scroll down quite a bit, but there are a bunch of other great books to check out on the list too.)

It’s a great honor to be on there with a number of the top fantasy writers working outside of the big traditional publishers. There are a lot of us and I’m humbled that Ours Is the Storm  is so well-regarded.

Check out BestFantasyBooks.com for great fantasy recommendations and new books.

The Victorious Death of Eliza Warden, Part One of the Wardens Trilogy, is out with beta readers. So far the feedback has been both great and very helpful. The entire trilogy was originally planned as a single volume, but came in around 320K words, more than three times as long as Ours Is the Storm, so it got split into three volumes.

I had to do some looking around to find out, but apparently this was the product of about four years of work. Soon I’ll move onto the process of searching for an agent or publisher, or simply decide to keep on self-publishing. All of that will be after I get my reader feedback and then go back through and make sure I used all the right words.

After that will be another fun part – ARC reading! If you or anyone else is interested, I’ll be giving out free Advanced Reader Copies of tVDoEW so that I can generate reviews in advance of the book release. Alert your reader/reviewer friends, direct them to this site, and get them to sign up for updates, and I’ll be ever grateful.

In other news, I’m nearly done with the first draft of the first book of my Mona series. Some of you read the short stories recently which were the genesis of this character, but Mona is an ass-kicking petty thief, vigilante, and reluctant hero. She resides in the frontier city of Canifar, where she’s on the run from a dangerous past in her home of Ria Vancha. Look for more news about that one going forward.

Here I am, procrastinating on actually working on my new projects (The Festival of Masks, a Mona Scrap, and RAZE, a fantasy web serial) or old projects (The Victorious Death of Eliza Warden) but sort of doing something useful by blogging a little.

The Lies of Locke Lamora is funny, brutal at times, clever, and fresh. It’s Ocean’s  Eleven meets Dungeons and Dragons, Catch Me If You Can meets Lord of the Rings. It’s a fine long read and stands well enough on its own, but is also part of a planned seven (I think) part series. Settle in and enjoy the creative profanity, teeth-knocked-out fights, and witty banter. I wouldn’t suggest it if you’re squeamish about any of those things, but if you are you may have found the perfect modern expression of fantasy thievery and con-art.

Locke resides in the canal-lined city of Camorr, which shares a lot with Terry Pratchett’s Ankh Morpork, Lieber’s Lankhmar, and renaissance Venice. He works for the Capa, sort of a Don-like crime boss, in a city that regulates its crime right along with its nobility. He leads the Gentleman Bastards, a con-artist group without peer, as they scheme and steal and pull one over on just about everyone else in the city. Things grow more complicated, however, as their latest job takes a few unexpected turns, and meanwhile a mysterious gray figure begins stalking the city’s criminal elite.

I will say that I felt a few parts of the book had a little too much room to breathe; a few pacing missteps and a little bit of forced dialogue aside, , this is a fun, engaging read, written in a modern style that makes the characters, events, and wildly imaginative setting easy to relate to. If you’re a fan of modern fantasy, crime stories, Fafhrd and the Gray Mouser, this might be for you. Want to get away from fantasy involving worldwide wars, the fate of humanity, and esoteric magic systems? This will be your thing.

This and other goodreads reviews here. 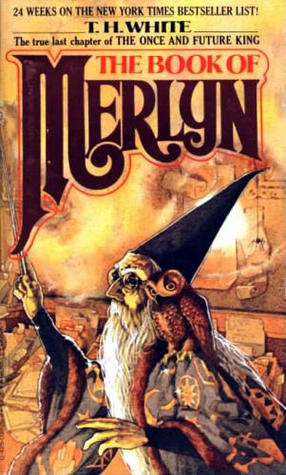 The Book of Merlyn

I’m not certain that this volume is quite as necessary as the back matter suggests. That said, it has the wit and beauty you’d expect, and includes one of my favorite segments (the geese) from The Sword in the Stone. Some of the segments about communism vs. capitalism, property – the more political topics – detracted for me. Then, however, those segments would be interrupted by the poignance and emotion that made me love The Once and Future King so much, and I was glad I’d picked it up. If you’ve read the rest of the Once and Future King, it’s worth it, but only as the capstone to the series.

Some other goodreads reviews here.