So this is the first time I’ve seen it all printed out: Yep, that’s the full, printed manuscript for The Victorious Death of Eliza Warden. It’s huge. Plenty of space for me to fill with red ink.

Coming up is the difficult process of trying to separate myself and my own knowledge from the experience of someone picking up the book sight-unseen. I’ve had some great input from beta readers (thanks! You know who you are) and more coming in (keep it coming!), as well as my own ideas about what needs to change.

The Victorious Death of Eliza Warden, Part One of the Wardens Trilogy, is out with beta readers. So far the feedback has been both great and very helpful. The entire trilogy was originally planned as a single volume, but came in around 320K words, more than three times as long as Ours Is the Storm, so it got split into three volumes.

I had to do some looking around to find out, but apparently this was the product of about four years of work. Soon I’ll move onto the process of searching for an agent or publisher, or simply decide to keep on self-publishing. All of that will be after I get my reader feedback and then go back through and make sure I used all the right words.

After that will be another fun part – ARC reading! If you or anyone else is interested, I’ll be giving out free Advanced Reader Copies of tVDoEW so that I can generate reviews in advance of the book release. Alert your reader/reviewer friends, direct them to this site, and get them to sign up for updates, and I’ll be ever grateful.

In other news, I’m nearly done with the first draft of the first book of my Mona series. Some of you read the short stories recently which were the genesis of this character, but Mona is an ass-kicking petty thief, vigilante, and reluctant hero. She resides in the frontier city of Canifar, where she’s on the run from a dangerous past in her home of Ria Vancha. Look for more news about that one going forward.

That line’s been on my mind for a while. Pertinent to the Wardens books. I’ve got beta copies out with several readers and so far am hearing good things. Hoping to be ready to do a final clean-up and shop it around late this year or early 2016.

You want some free fiction? Check out Through the Suffering of Others, an anthology featuring established and up-and-coming writers, available for download here, at Fictiongarden.com. There’s nothing to sign up for or do except get yourself a whole bunch of great short stories and novellas. You just might find your new favorite author. The anthology also features my new original short work, “The High Red Country,” a tale of revenge that begins in fire and ends with – well, you’ll just have to read it. 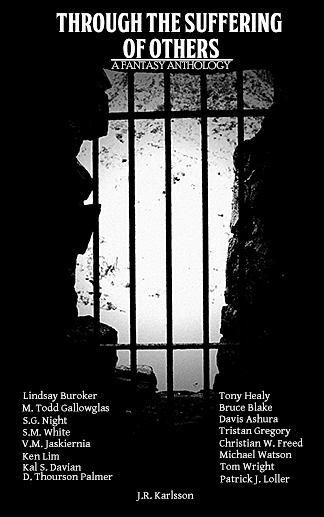 “Do you know my poetry?”

I can’t believe I waited so long to watch this. A spectacular, odd, and puzzling film which I’ll be thinking about and certainly revisiting for another viewing.

A Jim Jarmusch (Ghost Dog: Way of the Samurai; Only Lovers Left Alive) western emanating style and complexity, Dead Man is one of those flicks that I’d only really heard of on my Netflix instant queue. I gave it a closer look and, aside from pre-Pirates Johnny Depp, found – Jim Jarmusch! A score by Neil Young? Billy Bob Thornton! John Hurt! Alfred Molina! Robert Mitchum! Iggy Pop?! There are even more really fantastic and surprising actors in this, too many to list, but needless to say I jumped right in, brushing off my chagrin at having left the movie to languish on my queue for so long.

Accountant William (Bill) Blake (no relation to the artist and poet) heads to Machine somewhere in the West to start a new job, only to discover the job’s taken. He finds himself at the end of the line, with no money and no prospects. A simple gesture of kindness to Thel, a beautiful woman who makes paper roses, leads to a series of unhappy events and choices which take William Blake further and further from what he knows. Aided and guided by Nobody, scholar, mystic, and  outcast of the local Native American tribe(s), Blake is on a journey through the mirror, unaware he’s already a Dead Man.

Dead Man is filmed in black and white, lending it a style more reminiscent of 40s Westerns than the Leone/Eastwood era. Further setting it apart is the dreamy, kind of trippy vibe, established immediately and reinforced with strange occurrences and poignant, quiet moments that would have been cut from a bigger studio film. Be warned, if you’re looking for fast-paced action, this ain’t it. That’s not to say there aren’t a few boxes of ammo fired, badass lines, or unusual characters–just don’t expect constant shootouts and bar fights.

The depiction of the Native Americans throughout the movie is especially well done and (reportedly) quite accurate. Neil Young’s haunting, stark, and largely-improvised score is perfectly matched to the film. As mentioned, there are too many great performances to list, but Hurt and Molina stand out, and it was nice to see Johnny Depp act a role a little more nuanced and meaningful than some recent ones (*cough drunk pirate cough*). Gary Farmer, whom I’ve only seen in Jarmusch movies but (according to IMDB) is in literally everything, is just fantastic as Nobody.

Jarmusch has a talent for a kind of quiet, heartbreaking combination of violence, peace, hope, and tragedy it’s tough to put words to. Watching Blake’s journey tuned a random evening’s Netflix selection into the discovery of one of my new favorite movies, and provided food for thought for a long time to come. The moment it was over, I was ready to watch it again. Highly recommended.